Down Argentine Way Part One (Table of Contents) 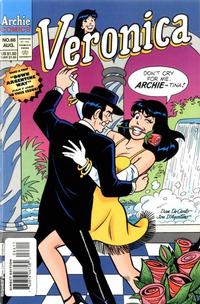 When reprinted in Betty and Veronica Double Digest (Archie, 1987 series) #225, writing is credited to George Gladir and inks are credited to Jim DeCarlo.

Just A Hair Away (Table of Contents: 3)

Genre
humor; teen
Characters
Veronica Lodge; Archie Andrews; Pop Tate; Romeo
Synopsis
Archie and Veronica are sitting at opposite sides of Pop's counter, so he has to ask "Why?" The problem was Veronica's hair.
Reprints

Down Argentine Way Part One (Table of Contents: 7)

Story ends on cliffhanger, to be continued in Veronica #67