Ink credit verified by Zakarin in interview with Jim Amash in the pages of Alter Ego #27 (August, 2003). 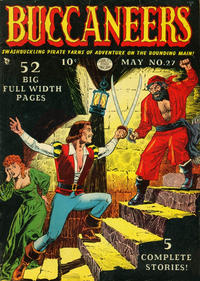 Alliance of Evil (Table of Contents: 1)

Genre
historical; adventure
Characters
Captain Daring; Patch; Sir Mark Drayton (Governor of Illyria); Lady Delores Drayton; Captain Jigg (villain); Captain Foxx [aka the Red Fox)
Synopsis
Capturing the villainous Captain Jigg, Captain Daring is warned by his foe that he will never overcome the Red Fox. Sure enough, through deception, Captain Foxx takes over the island of Illyria and declares himself the new governor. Thanks to the daring of Lady Delores, Jigg and Foxx go at one another, allowing Daring and his men to overcome them.
Reprints
Keywords
Illyria; pirate; The Revenge (Captain Daring's ship)

Inker credit verified by Zakarin in interview with Jim Amash in Alter Ego #27 (August, 2003), which reprints the splash page.

[The Most Dynamic Magazine on the Newstands!] (Table of Contents: 2) (Expand) /

The Signet of the King (Table of Contents: 3)

The Lady in the Iron Mask (Table of Contents: 4)

The Code of Treachery! (Table of Contents: 7)

Genre
historical; adventure
Characters
Captain Eric Falcon; Captain Cutlass (villain)
Synopsis
Captain Falcon spots a ship ablaze and goes to her aid, only to discover a band of plunders who have looted the ship and set it ablaze.
Reprints
Keywords
The Charity (a ship)

The Castle of Greed! (Table of Contents: 8)