The indicia for this issue is without number or date; the cover has 'No. 23' bottom left, just below 10c price 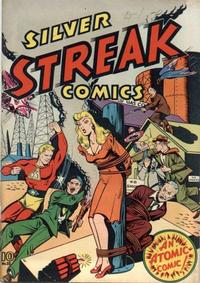 Millions In Masterpieces (Table of Contents: 2)

Weeds in the Coffee Plantation (Table of Contents: 4)

The Face on the Postoffice Wall (Table of Contents: 6)

Madame Upswoop of the Social Register (Table of Contents: 10)

First Line of Dialogue or Text
Once more around the park, James!
Genre
humor

Previous indexer listed "Louis Ferstadt (signed)" for pencils and inks. However, the "signature" is just "copyrighted 1946 by Louis Ferstadt". Ferstadt was probably the packager for this comic. The art strongly resembles Al Zere's work on "The Joy Family," "Dick Transom," "One Round Hogan" for Fox, as well as the "Flossie" strip that appeared in some Quality and Harvey titles.

Here's the Jacket You Wanted At a Sensational Saving! (Table of Contents: 17) (Expand) /