Whole of back cover, and inside front cover missing from scan. 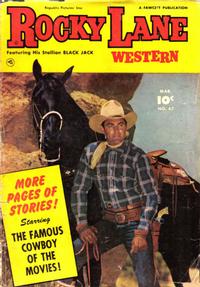 Noose for a Neck (Table of Contents: 1)

Inside front and back covers.

The Prairie Massacre (Table of Contents: 2)

Genre
western-frontier
Characters
Rocky Lane; Black Jack (horse); guard
Synopsis
Rocky disguises himself as an Indian in order to get near the renegade Indians who have stolen ammunition.

The very lively horses are typical of Carlson, especially with the outstretched front legs.

Genre
humor; western-frontier
Characters
Sagebrush
Synopsis
Sagebrush is going to the theatre to see "William the Juvenile", or Billy the Kid.

Script and art credits for this feature identified by Jerry Bails' Who's Who.

Thanks to the GCD-Main mailing list, this artist must be Bolle, and compared with his work on Red Mask at this period, it matches, especially the drawing of the very realistic hats is similar, and inking matches his much later work on UFO Flying Saucers for Gold Key. Can find no match on the inking around 1954, but seeing how he varied and developed his drawing, the inking could be his too.

A Close Shave (Table of Contents: 6)

Notes as for the first Bolle story.

Art as on the other Carlson story.

The Midnight Marauders (Table of Contents: 10)

The layout with many close up half-faces is very similar to Forte's signed story in Geronimo #2, so he may have pencilled it.