Indexed from a scan at http://digitalcomicmuseum.com

Dangerous Past! (Table of Contents) 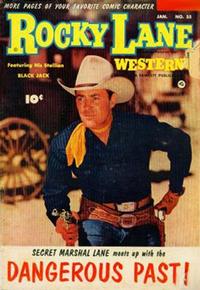 Dangerous Past (Table of Contents: 2)

Thanks to the GCD-Main mailing list, this artist must be Bolle, and compared with his work on Red Mask at this period, it matches, especially the drawing of the very realistic hats is similar, and inking matches his much later work on UFO Flying Saucers for Gold Key. Can find no match on the inking around 1954, but seeing how he varied and developed his drawing, the inking could be his too.

A Winning Formula! (Table of Contents: 4)

The Tricky Problem (Table of Contents: 5)

The rider at top is by Carlson, who illustrated the other entries in this feature.

A Latin Scholar! (Table of Contents: 8)

The Double D Dilemma Duty or Debt! (Table of Contents: 9)

Genre
western-frontier
Characters
Rocky Lane; Black Jack (horse); Spud Halsey (stagerobber)
Synopsis
Rocky arrests a stagerobber who turns out to be an old friend that saved his life when they were kids, so he turn him loose and resigns his job as Marshal. But they meet again very soon.
Reprints

Art notes as for the first Bolle story.