Genre
humor; children; sports
Characters
Richie Rich; Audrey Smith
Synopsis
Audrey is struggling at playing croquet due to the hoops being shaped like dollar and cents signs, though Richie seems to have no trouble.
Keywords
croquet 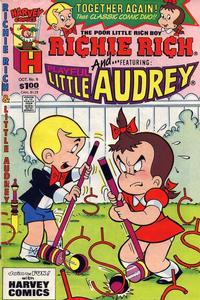 Genre
adventure; children; western-frontier
Characters
Richie Rich; Audrey Smith
Synopsis
Richie and Audrey get into a time machine at the Rich Invention Center; they materialize in the 16th century, the 17th century, and in the old west, where they step out of the machine and bank robbers steal it.
Reprints

Genre
humor; children
Characters
Audrey Smith; Melvin; Lucretia; Mr. Smith
Synopsis
Audrey wants to show off for the purpose of impressing her friends by having superhuman strength, flying like a bird, and becoming invisible - but the kids are still not impressed no matter how much she tries. All these events were nothing but a dream, but she did impress her father while she was dozing off - he was impressed by the loud snoring she made which he recorded via a tape recorder.
Keywords
invisibility

Faces of Richie and Casper for readers to cut out and paste to paper plates so that they can be used as masks.

The Fattest Gun in the West (Table of Contents: 5)

Genre
humor; children
Characters
Mayda Munny; Cousin Freddy; Richie Rich; Gloria Glad
Synopsis
Mayda gets her Cousin Freddy to pose as her boyfriend to make Richie jealous. She's baffled to see Richie out with quite a few other girls. Or was he?
Reprints

On the bottom of the last page is a line of text promoting the next issue of "Richie Rich and..." which featured Mayda Munny.

The Real Sitter (Table of Contents: 7)