The Missing Pyramid (Table of Contents)

First Line of Dialogue or Text
Now you see it... Now you don't! Where is The Missing Pyramid?
Genre
anthropomorphic-funny animals; superhero
Characters
Super Goof; parachutist (off in the distance)
Synopsis
Super Goof searches for the titular “missing pyramid”, floating down from the sky using the flap of his long-johns as a parachute.
Reprints 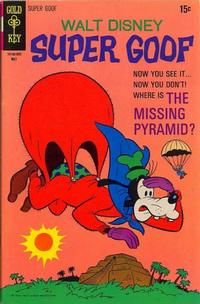 The Missing Pyramid (Table of Contents: 2)

First Line of Dialogue or Text
It is midnight, and Goofy tosses restlessly in bed...
Feature Logo

Genre
humor
Characters
alien
Synopsis
A traveler is stranded on a country road with no gas, but he’s an alien.
Keywords
alien; flying saucer

Top half of page.

First Line of Dialogue or Text
What has four legs but only one foot?
Characters
Gold Key Kid
Synopsis
Jokes and riddles submitted by readers.
Keywords
jokes; riddles

Western’s standard closing logo “the phrase ‘The End’ in script, embedded in a somewhat circular design” is absent from the final panel of this story, as a closing caption runs for the full width of the bottom of the panel.

Pantomime, except for Super Goof's sneezes. First USA printing of this story in color. Original printing was black and white on the issue's inside front cover.

Synopsis
Reader-submitted "doodles", made from various letters of the alphabet and numbers.