AC Comics [straight, star in A] 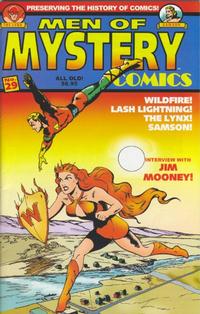 About This Issue (Table of Contents: 2)

Comments on the stories in the issue, with two panel reprints

Note printed in this issue says the story is reprinted from Smash Comics #31, but it is wrong.

First Line of Dialogue or Text
On a lonely country road in the mountains...
Genre
superhero
Characters
Flash Lightning [Lash Lightning]; Mastermind; The Mummy [Professor Vatz] (death); Amy Lane; Old Man of the Pyramids
Synopsis
The Mastermind invents a machine to give him lightning powers. He allies himself with the Mummy to try to learn the secret of his radium-coated bandages, but kills him in a fit of anger. Later Mastermind helps foreign agents sabotage defense plants.
Reprints

Title character is just referred to as "Lightning" in the story, with "Flash" apparently a late addition to the logo. Story signed by Mooney in panel seven of page seven.

Interview with comics artist Jim Mooney, with covers, panels, and other illustrations

An updated version of the Golden Age Wildfire.

From the Moth to the Lynx (Table of Contents: 8)

Characters
The Moth; The Lynx

Theories on how Jim Mooney's "The Moth" story ended up being published as "The Lynx."

[The Coming of the Lynx] (Table of Contents: 9)