Challengers of the Unknown Must Die
([November] 2004)

Reprints the 1991 mini-series with extra material - sketches, introductions - and an original Multi-Man story.

Challengers of the Unknown Must Die (Table of Contents) 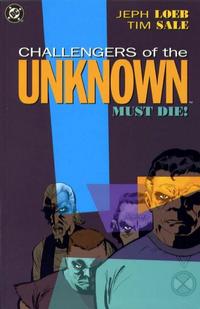 Synopsis
Original art. A section of the front page of the Tattle Tale newspaper telling of the Challenger Mountain explosion.

First Line of Dialogue or Text
I bought this comic because of the cover.
Synopsis
Brian Bendis recounts how he bought the original Issue 1 for the Brian Bolland cover (picture included).
Reprints

"The Challengers Must Die!" (Table of Contents: 3)

A very abbreviated glimpse at the Challenger's history.

Tell the Truth! (Table of Contents: 4)

Lives of Our Days! (Table of Contents: 5)

The Restless and the Young! (Table of Contents: 6)

As the World Spins! (Table of Contents: 7)

The Beautiful and the Bold (Table of Contents: 8)

Another World! (Table of Contents: 9)

First Line of Dialogue or Text
We had never done comics.
Synopsis
Jeph Loeb explains how the Multi-Man story, "I Know You Are, But What Am I?" was created, lost, and finally presented in this volume.
Reprints

Genre
adventure
Characters
Multi-Man II; Ice; Guy Gardner; DMV clerks; Kilowog; Fire; Multi-Woman III; Ace Morgan; Rocky Davis; Red Ryan; various supervillains
Synopsis
Multi-Man reads his obituary. It says he died heroically saving the Challengers, so he demands a retraction. Needing valid ID, he goes to the Department of Motor Vehicles for a driver's license. He sabotages the computers so Guy Gardner attacks. Multi-Man’s head falls off: he’s a robot. Kilowog finds that Multi-Man II was created when Duncan Pramble (the original Multi-Man) lost his powers. The robot thought he was the real Multi-Man. Ice thinks he’s lonely so he is rebuilt with a Multi-Woman as companion. Multi-Man II and Multi-Woman III drive off. The Challengers read about it in the paper.
Reprints
Keywords
hero team

Multi-Man in a epilogue to the miniseries. In a forward, Jeph Loeb explains this original story is an epilogue to the Challengers of the Unknown miniseries of 1991. It was slated for Justice League Quarterly, but that was canceled. So this is the first publication.

Synopsis
Five pages of early sketches and notes by Tim Sale. Shows the evolution of the characters. Includes a joke picture of the Challengers as toddlers.
Reprints