In the Heart of America-- A War Zone! (Table of Contents) 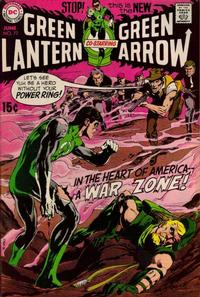 Journey to Desolation! (Table of Contents: 1)

Job Number
S-368
Genre
superhero
Characters
Green Lantern [Hal Jordan]; Green Arrow [Oliver Queen]; Guardians of the Universe; Old-Timer; Jacob; Slapper Soames; Johnny Walden; Black Canary (cameo, preview panel for following issue)
Synopsis
Green Lantern, Green Arrow, and the Old-Timer come across the company town of Desolation, where the boss Slapper Soames plans to execute Johnny Walden to silence the songs he sings which have inspired the people of Desolation to think about a better way of life. As Green Lantern joins the townspeople in attacking Soames' stronghold, the Guardians inform him that since he is on a leave of absence they have reduced the power of his ring. But even weakened, Green Lantern and Green Arrow are able to free Johnny and turn Soames and his men over to the authorities.
Reprints