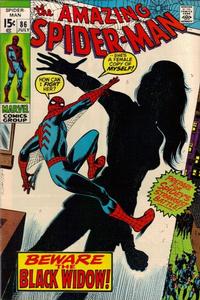 First Modern Look Black Widow. Don Heck was originally credited with layouts on pages 1-3 but Nick Caputo sees no sign of his input on those pages.

Candid Comments Calculated to Amuse and Confuse You (Table of Contents: 5) (Expand) /

First Line of Dialogue or Text
Dear Stan, John, Jim, and other things that go bump in the night...
Characters
Spider-Man; Schemer; Kingpin