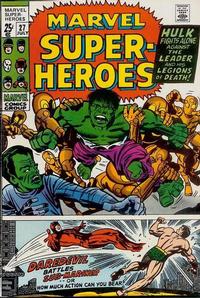 In Mortal Combat with... Sub-Mariner! (Table of Contents: 1)

Genre
superhero
Characters
Daredevil; Sub-Mariner [Namor]; Warlord Krang
Synopsis
Namor hires Franklin and Murdock to sue the human race on his behalf. When this doesn't work, he gets himself arrested so he can have his day in court. Realizing humanity won't listen, the Sub-Mariner goes on a rampage which brings Daredevil into the (hopeless) fray. Namor returns to the sea out of respect for DD and to stop Krang from taking over Atlantis.
Reprints

Back from the Dead (Table of Contents: 2)

Genre
superhero
Characters
Hulk [Bruce Banner]; Thunderbolt Ross; Glenn Talbot; Betty Ross; Rick Jones; Leader [Samuel Sterns]; Humanoids; Lyndon Johnson (cameo)
Synopsis
Saving Talbot and himself from plunging to their deaths, the Hulk decides he is tired of world travel and leaps home. Waking up in gamma base, Bruce is once again jailed as a traitor and the president once again sets him free (Rick told the commander in chief the secret of the Hulk a few issues ago). Banner and Talbot are once again sent to Astra Island to continue a test of the absorbatron but the leader sends an army of Humanoids who finally succeed in capturing the Hulk.
Reprints
Keywords
absorbatron; gamma base; Humanoids

At this point, all the stories are multi-part in cliff-hanger style and are continued in following issues.

Unus, the Untouchable! (Table of Contents: 3)

Job Number
X-803
Genre
superhero
Characters
The X-Men [Professor X (cameo); The Angel; The Beast; Cyclops; Marvel Girl [Jean Grey]; Iceman]; Unus (introduction); Mastermind
Synopsis
After being attacked by a mutant hating crowd, Beast gets fed up and quits the X-Men. He becomes a professional wrestler but meets Unus, a mutant who cannot be touched. Unus is trying to join Magneto's Brotherhood so he takes on the X-Men. The X-Men barely fend him off and find Beast has constructed a machine that will actually increase Unus' powers. The X-Men try to prevent Hank from using the machine, but, once Unus has been zapped, he finds that he cannot even eat without the food being repelled out of his hands. Beast returns him to normal and Unus promises to will steer clear of Magneto.
Reprints