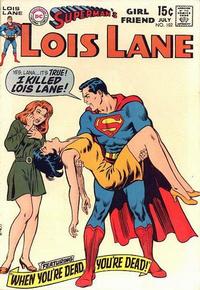 Job Number
W-459
Genre
superhero
Characters
Lois Lane; Superman; Rajah Satdev; Lana Lang
Synopsis
Lois is wooed by an Indian rajah, but she learns that he is apparently some sort of demon. Superman tries to help her but Lois is injured in the battle and believed dead.

Story continues in the following issue. One panel was reprinted in The Superman Family (DC, 1974 series) #169.

The Cry-Baby of Metropolis! (Table of Contents: 4)

Take a Danger-Packed Tour with Batman and Robin! (Table of Contents: 5) (Expand) /