No date given in indicia or rest of the comic. However story content refers to scrap paper drives and defeating the Axis powers Germany and Japan, making this comic produced at least prior to May 1945. Issue number two refers to the atom bombs and had reported to the U.S. Copyright Office a publication date of February 23, 1946, making issue #77 the probable actual first issue. (as reported by Ken Quattro in the Comics History Exchange page on Facebook, 27 August 2016). 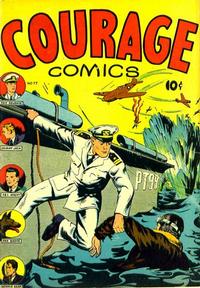 The Courage That Counts (Table of Contents: 1)

First Line of Dialogue or Text
Of all the daring feats carried out by the United States Navy...
Genre
war

First Line of Dialogue or Text
Many a person could be saved from a life of crime...
Genre
detective-mystery

Sheriff Jack Courage was based on Sheriff J. Edward "Jack" Slavin, a Sheriff from Connecticut and also editor and publisher of this comic.

Working for Victory (Table of Contents: 4)

Characters
Uncle Sam; Danny; Dot
Synopsis
Danny and Dot burn their scrap paper in a bonfire. Uncle Sam admonishes them by demonstrating all the useful purposes for scrap paper in the war effort.

PSA for the scrap paper drive.

First Line of Dialogue or Text
When does a man need his courage most?
Genre
detective-mystery

Genre
drama
Synopsis
Dave Henry is a juvenile delinquent, but eventually grows out of it to become a judge.

A very solemn story, but rendered in a loose cartoon style.

First Line of Dialogue or Text
This month, the red badge of courage is awarded to Jake...
Genre
animal; war
Synopsis
The story of a US Marine unit's heroic dog Jake.