On sale date as listed in the Catalog of Copyright Entries, Periodicals, 1945, page 262, registration number B682317. 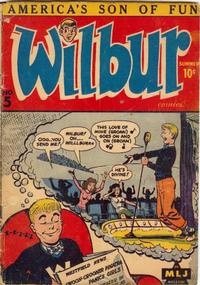 In This Issue of Wilbur (Table of Contents: 2)

Riddle Riddle Who's Got the Riddle? (Table of Contents: 3)

First Line of Dialogue or Text
Say! Have you seen this ad in the school paper Red?
Genre
humor; teen
Characters
Wilbur Wilkin; Red Wilson; Mr. Wilkin; Professor Gooble
Synopsis
Wilbur poses a riddle to his father, which upsets his golf game and puts him in the hospital.
Keywords
golf

First Line of Dialogue or Text
The other day I wrote a letter to my girl friend and I said some pretty mushy things.

One letter from Bob Lowndes and a list of other readers with addresses who also sent letters.

The Deputy Sheriff (Table of Contents: 5)

Second page has statement of ownership and management.

First Line of Dialogue or Text
You think this hair tonic is a marvel.. you say it can't be beat, eh?
Genre
humor
Characters
Dr. Leroy; Jackie

Seven one-panel gags. A tombstone and sign with Roy's signature is included.

First Line of Dialogue or Text
The people of Burma celebrate their new year on April first...
Genre
non-fiction

Three 'Believe It or Not' type facts.

First Line of Dialogue or Text
When Katy walks down the beach you'd think you were in a zoo full of wolves by the sound of the howling--
Genre
humor; teen
Characters
Katy Keene; Sis Keene; Joe; Tom; The Jones Boys; Bill
Synopsis
Katy and Sis go to the beach, where Sis gets candy by introducing men to Katy.
Reprints

How to draw a duck, rabbit, pig, and rooster.

First Line of Dialogue or Text
Boy oh boy! Am I glad to get off this train! Another day of travelling and I'd have sprouted a whistle!
Genre
humor; teen
Characters
Elmer Q. Pluggett; Wilbur Wilkin; Mr. Wilkin; Mrs. Wilkin; Eleanore (chicken); Mike
Synopsis
Wilbur mixes up the wrong suitcases on a train trip

Ammunition box on train station platform has "To Pvt. Lin Streeter from Novick" written on the side.

This is a panel-for-panel redraw of "Train Troubles" from Archie Comics (Archie, 1942 series) #1, with the faces of Archie characters replaced by those of Wilbur characters.

Ugly Blackheads Out In Seconds (Table of Contents: 16) (Expand) /