On sale date as listed in the Catalog of Copyright Entries, Periodicals, July-December 1950, page 292, registration number B257985.

First Line of Dialogue or Text
Some doll! Has she got a friend, Wilbur?
Genre
humor; teen
Characters
Wilbur Wilkin; Linda Moore
Reprints 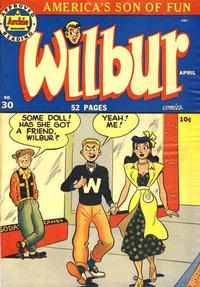 Lifting the Curtain on the Newest Addition to the Archie Comic Group! (Table of Contents: 3) (Expand) /

Here It Is! Your Archie Annual (Table of Contents: 4) (Expand) /

Wilbur versus the Green Hairnet (Table of Contents: 6)

First Line of Dialogue or Text
As chairman of the "All Sports Night" entertainment committee - who have you got lined up for the main event, Wilbur?
Genre
humor; teen
Characters
Wilbur Wilkin; Laurie Lake; Linda Moore; Red Wilson; Mr. Dripwaite; The Green Hairnet (wrestler); Mr. Hardhat; Reggie Mantle; Miss Hybarr [Strangler Louise]
Synopsis
Wilbur makes a joke about hiring professional wrestler The Green Hairnet for the Riverdale High "All Sports Night," but Laurie takes him seriously and plasters the school with posters. Wilbur writes the Green Hairnet's manager, expecting to be turned down, but the Hairnet's lost love, Strangler Louise, went to school at Riverdale and he accepts.
Keywords
charity; lost love; professional wrestling; telephone

The Green Hairnet's name is a play on the Green Hornet. The Hairnet is a parody of professional wrestlers like Gorgeous George.

Would seem to be a rewrite of an Archie story as Riverdale is his high school, Wilbur is supposed to go to Westfield.

A Pressing Engagement (Table of Contents: 8)

First Line of Dialogue or Text
Hi, Wilbur! Going to the dance tonight?
Genre
humor; teen
Characters
Wilbur Wilkin; Linda Moore; Red Wilson; Laurie Lake
Synopsis
Linda comes up with a plan to have Wilbur go without a date to the dance, figuring she would have a chance once he's alone at the dance.
Keywords
dance; pants pressing; tailor

Name Your Poison (Table of Contents: 11)

Statement of Ownership for October 1, 1949. No circulation figures given.

First Line of Dialogue or Text
All our fans are wishing me luck in the movies, Sis, but I've taken my screen test a long time ago and I'm still waiting my chance before a camera!
Genre
humor; fashion; teen
Characters
Katy Keene; Sis Keene; Randy Van Ronson; Jarvis; Heathcliffe (dog)
Synopsis
Katy and Sis discuss how to attract attention at the corner of Hollywood and Vine.

First Line of Dialogue or Text
Are you keeping those boys after class again, Miss Gargle?
Genre
humor; teen
Characters
Wilbur Wilkin; Red Wilson; Linda Moore; Gertrude Gargle; Mr. Dripwaite; Hubert (flashback)
Synopsis
Miss Gargle tells Wilbur and Red a sad story about her wedding day during World War I when the groom (a soldier) was late and she called off the wedding. She had second thoughts, but the soldier was shipped out and never came back. Wilbur and Linda try to find a match for Miss Gargle using the lonely hearts section of the newspaper, but the plan has an unforeseen ending.
Keywords
blackboards; lonely hearts column; slang; wedding; World War I