The monkey character Jocko at lower right is from the feature "Myrtle and Jocko" which does not appear in this issue but did appear in numerous issues of "Frisky Fables." 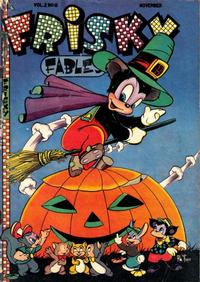 First Line of Dialogue or Text
Instead of giving me a permanent--you've made me bald!
Genre
humor; anthropomorphic-funny animals
Characters
Dopsy Durvy; Beast
Synopsis
Dopsy sells "Never Fail Cosmetics" door-to-door. If he can make the ugly Beast (from the story "Beauty and the Beast") handsome, his business will improve. The Beast says only a kiss from a beautiful woman will break the curse. Dopsy makes the Beast up to look like crooner "Hank Swoonatra" (a caricature of Frank Sinatra) but they're mobbed by bobby-soxers. Plastic surgeon Dr. Fixit converts the Beast into a double for movie star Chuck Doya, but an ugly woman kisses him and makes him ugly again. The Beast finally gets a kiss from a beautiful girl and is cured.
Reprints

"Hank Swoonatra" is spoof of singer Frank Sinatra, but I am not sure who "Chuck Doya" is supposed to be (he has red hair, so perhaps it's Van Johnson).

First Line of Dialogue or Text
Things have come to a pretty pass!
Genre
anthropomorphic-funny animals
Characters
Zany Giraffe; Trade Rat
Synopsis
Zany Giraffe tries to solve the mystery of who has been stealing possessions from the other forest animals and leaving odd objects behind. He discovers it is Trade Rat, who opens a Trading Post so he can stay in the community.
Reprints

Zany Giraffe doesn't talk (his dialogue is expressed in thought balloons).
Writing credit from Martin O'Hearn at http://martinohearn.blogspot.com/2019/05/mickey-klar-markss-zany-giraffe.h…
Title is from Marks's papers, archived at University of Southern Mississippi.

The ninth "panel" on this page consists of two small advertisements (for Pulvex Flea Powder and foreign stamps).

First Line of Dialogue or Text
Woof, did you know that many pirates were double-jointed?
Genre
humor; anthropomorphic-funny animals; children
Characters
Johnny; Woof; Mr. Artist
Synopsis
Johnny's dog pal Woof finds a treasure map. Mr. Artist draws them into a treasure hunt story, but after they unearth the treasure chest they are accosted by pirates. Mr. Artist comes to the rescue with his eraser.
Reprints

The Easy Life (Table of Contents: 6)

Genre
anthropomorphic-funny animals
Characters
Herbie Hare; Big Bear; Murgatroyd Mole
Synopsis
Herbie runs away and joins the circus but discovers (since he has no special talent) that circus life is hard work, not fun.

First Line of Dialogue or Text
Where were you on the night of January 16th?
Genre
anthropomorphic-funny animals
Characters
Tick; Tack; Toe; Judge Owl; Little Miss Bo-Peep
Synopsis
The kittens discover their toys and dolls come to life at midnight and are angry at how they've been abused by rough play.
Reprints
Keywords
Ayn Rand

"The Night of January 16th" was a 1934 play written by Ayn Rand (adapted to film in 1941). This comic story has nothing to do with the play's plot, the date is not relevant, in fact there is no other reference to "January 16th" other than the splash panel, so this was probably an in-joke by the scripter.

First Line of Dialogue or Text
Bow wow! How about you and me sharing a bone together?
Genre
humor; anthropomorphic-funny animals
Characters
Niffy (dog)
Synopsis
Niffy is attracted to a female Dalmatian but she is not impressed. He deliberately contracts measles so he'll also have spots (at least temporarily) and wins her affection.

First Line of Dialogue or Text
I cannot tell a lie. I did it with Thor's little hammer!
Genre
humor; anthropomorphic-funny animals
Characters
Icicle Ike; Thor; Odin
Synopsis
A statue of Thor comes to life and takes penguin Icicle Ike to Valhalla. Ike and Thor decide to visit the hostile Ice Giants to stave off war. Thor is defeated in the feats of strength contest, but Ike saves the day and prevents war.
Reprints

The Chicken Who Said He Couldn't Swim (Table of Contents: 10)

Text story with masthead illustration. There appear to be one and possibly two names in the masthead art but they are illegible.