Art credits verified by Fred Ray. This cover, featuring all of the Action heroes, has been reprinted often. 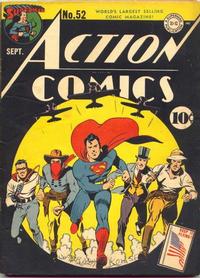 Inside front cover. Review of Cowhand Goes to Town by Phil Strong, with pictures by Kurt Wiese. Page includes Superman's Secret Message, and the indicia.

The Emperor of America (Table of Contents: 3)

Genre
superhero
Characters
Superman [Clark Kent]; Lois Lane; Jimmy Olsen; Perry White; The Emperor of America (villain, introduction)
Synopsis
The President of the United States vacates his position in favor of The Emperor, who uses a non-resistance ray to take over America without firing a shot. He doesn't count on Superman providing any opposition, however.
Reprints

An imaginary story in post-war America.

Sing a Song of Six Guns! (Table of Contents: 7)

Genre
superhero
Characters
The Vigilante [Greg Sanders] (origin); Stuff
Synopsis
Greg's show is almost pulled off the air until he learns how to make the jive with some classical kids who've had their instruments heisted by Jiggers Jolton.

Vigilante tells his origin and reveals secret identity to Stuff.

First Line of Dialogue or Text
This is quite a mission to be sent on!
Genre
humor; military
Characters
Pvt. Pete

The Battle of a Thousand Years (Table of Contents: 10)

The Case of the Stolen Spectacles! (Table of Contents: 11)

A continuation of Mr. America of the Mr. America feature. Although billed as Americommandos, the strip still features Mr. America and Fatman. Fatman does not appear in this story.

First Line of Dialogue or Text
He's in charge of our complaint department...
Genre
humor