First of many issues of Boys' and Girls' March of Comics to be devoted to Tom and Jerry.
This issue has variants:
Keywords
giveaway premium 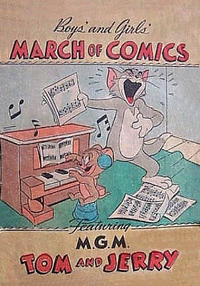 [Springtime for Thomas] (Table of Contents: 1)

Story starts on inside front cover and ends on inside back cover. Use of the exclamation “Yow!” (twice: page 14, panel 4 and page 15, panel 4), along with a cynical plot in which all characters (including Kitty) suffer physical abuse, and the fact that John Stanley used to write for the “Our Gang” title which was the predecessor to the “Tom and Jerry” comic book title, suggest the possibility of this story having been written by John Stanley.

Back cover displays two yellow strips across its width. The strips are each 3 inches high, and are placed at the very top and the very bottom of the back cover. Within these strips are floating heads of the characters seen in the issue. Top strip from left to right: Tuffy, Jerry, Tom, Jerry, Tuffy. Mice appear twice. Bottom strip from left to right: Tuffy, Kitty, Tom, Jerry. The remaining back cover space in the center is left blank to contain the name and logo of the business using the comic as a promotional item.