Genre
detective-mystery
Characters
Speed Saunders
Synopsis
A police detective is hiding under a dock, with either a body or a suspect.
Keywords
automatic pistols 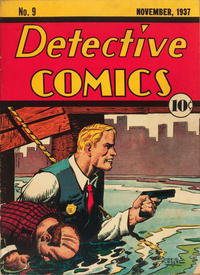 First Line of Dialogue or Text
Who is the old gent...
Genre
detective-mystery
Characters
Speed Saunders; Gloomy Jake Jones (introduction); Mike Molona (introduction, villain); the Mayor (introduction, villain)
Synopsis
Speed notices how many hobos and derelicts are on the street. He trails one named Gloomy Jake, and sees him get into a car belonging to racketeer Mike Molona. Disguised as a delivery man he knocks at Molona's door, is recognized by the goon who answers, and knocks him out. Putting on a butler's outfit he hides under the table, where he overhears Jake trying to sell missing tax reports to Molona and the Mayor. Speed confronts them, but is shot, The police break in, and Jake is revealed to be an undercover police investigator.

Gardner Fox does not begin writing until issue 18.

[Mystery of the Wholesale Kidnappings, Part 5] (Table of Contents: 5)

First Line of Dialogue or Text
Larry and G-Man, Hatch...
Genre
crime; detective-mystery
Characters
Larry Steele; Dr. Sargoff (introduction, villain); Sonia Sargoff (villain); Dutch (villain); Squinty (villain)
Synopsis
Larry and Hatch have discovered a basement laboratory and are being held at gunpoint by the doctor's wife. Larry overpowers her and they confront the doctor. He claims he will drain the embalming fluid from the four bodies and restore them to health, but Sonia snatches a gun and again holds them prisoner. A boat filled with G-Men have arrived, and the operation is performed successfully. One of the revived bodies turns out to be that of Larry's missing father. The doctor poisons himself in preference to being taken alive.

Death in the Radio-Studio (Table of Contents: 6)

Genre
detective-mystery
Characters
Cosmo; Brenner; Glasser (introduction, villain); Hal Lane (introduction, death)
Synopsis
Singers over the Federal Broadcasting System are being mysteriously killed. Vice-President Brenner asks Cosmo to look into it. He discovers an elaborate device which releases a poison gas into the faces of the singers as they step up to the microphone. The radio monitor Glasser is revealed to be behind the extortion plot.

story does not match writing style of Wheeler-Nicholson

The Johnson Mystery (Table of Contents: 10)

First Line of Dialogue or Text
Two days ago...
Genre
adventure; spy
Characters
Bart Regan; Sally; Agent R-42 (introduction); Talvanian ambassador (introduction, villain); Talvanian spies (introduction, villain)
Synopsis
Bart and Sally are sent to the Talvanian Embassy in order to help Agent R-42. Bart enters under false pretenses, but hides and locates R-42, who is a captive. The ambassadors try to discover where he has hidden some stolen dispatches. Bart is caught and is about to be shot, when Sally sends a gas bomb through the window and saves both Bart and R-42.

Silver and Lead (Table of Contents: 12)

First Line of Dialogue or Text
Holy smoke!
Genre
adventure; detective-mystery
Characters
Slam Bradley; Shorty; Sgt. Kelly; The Human Fly (introduction, villain); Snoop Dolan (introduction)
Synopsis
Slam demonstrates how a thief might have scaled the outer wall of the skyscraper and stolen jewels from a room on the 14th floor. He later captures "The Human Fly" by pursuing him up the outer wall to the roof.

Story title from next issue blurb in previous issue.

A poster on the wall in panel 21 urges readers to join the Junior Federal Men Club, New Adventure Comics. Federal Men was another of Siegel and Shuster's strips.