They Stand Helpless Before an Alien Who Dooms Them.. To Infancy! (Table of Contents) 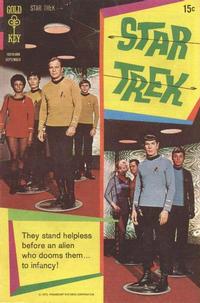 The Youth Trap (Table of Contents: 1)

Divided into Part I and Part II. Depicts the Captain's Log as a hand-written document. Scotty is depicted as a young blond man, not resembling James Doohan at all.

Checklist of current releases and brief write-ups on upcoming Gold Key releases including The Flintstones (with illustration), H.R.Pufnstuf, The Boatniks, Tarzan and the Apes (sic. as printed; should be Tarzan of the Apes), Turok Son of Stone, Family Affair, Moby Duck and the non-comic publication Pencil Puzzle Fun. Located between Part I and II of the main story.

First Line of Dialogue or Text
What question can never be answered 'Yes'?
Genre
humor
Characters
Gold Key Kid
Synopsis
Gold Key Kid tells a joke to introduce the Jokes on You feature.

Located between Part I and II of the main story.

...As a Cosmetologist/...As an Air Traffic Controller (Table of Contents: 5)