...The Unbeatable Inhumans! (Table of Contents)

According to a letter from Herb Trimpe dated 1998, he states that Kirby provided either layouts or complete pencils, and "I can say for sure I inked this particular cover". Nick Caputo adds that per Mark Evanier, Kirby never provided layouts for covers. It's possible that Trimpe mis-remembered and it was actually Marie Severin who provided the cover layout (Marie worked on most cover roughs for Marvel in this period). Nick adds that the background figures all look like Trimpe's work, and while the Surfer and Black Bolt look Kirbyesque, the musculature of the Surfer in particular is much thinner that Kirby depicts him (see interior story). 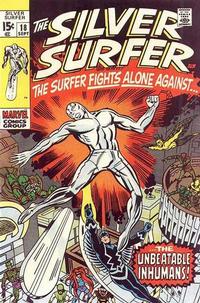 To Smash the Inhumans! (Table of Contents: 2)

Although the next issue is called for on the last page, this is the final issue of the series.

Who Speaks for the Surfer? / letters page / 1 page (report information)

First Line of Dialogue or Text
Dear Stan and John, In your issue of the Silver Surfer, you seem to attack the behavior, even the purpose of the everyday man.
Reprints