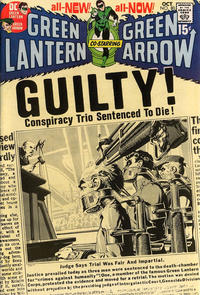 Even an Immortal Can Die! (Table of Contents: 1)

Job Number
S-495
Genre
superhero
Characters
Green Lantern [Hal Jordan]; Green Arrow [Oliver Queen]; Old-Timer; Guardians of the Universe; Tribune
Synopsis
For putting the welfare of Green Lantern ahead of the ecological welfare of Planet Earth, the Guardians of the Universe send Old-Timer, accompanied by Green Lantern and Green Arrow as witnesses, to the Planet Gallo to be judged by the Tribune. But when they are all muzzled and the Old-Timer is judged guilty without trial, the heroes realize that something is terribly wrong. They discover that the real Tribune have been replaced by their mechanic and fight to restore the proper process of justice and save the life of the Old-Timer.
Reprints

Story is meant to evoke the trials of the "Chicago Eight," particularly the binding and gagging of Bobby Seale.