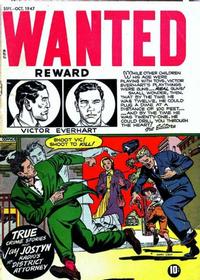 The stories in this magazine are based on fact. However to protect the innocent members of the families of criminals whose careers are revealed the publishers of Wanted have employed wholey fictitious names

This is a true story, although some of the names have been changed out of consideration for innocent people involved. It deals with what some people call "Juvenile Delinquency" problems confronting America today.
Woolfolk credit from Martin O'Hearn, per http://martinohearn.blogspot.com/

The Sinister Suitcase (Table of Contents: 8)