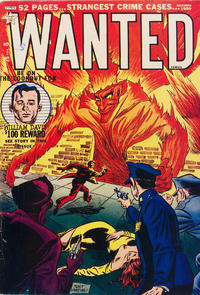 The Man Who Lost His Face! (Table of Contents: 1)

The Red Neck-Tie (Table of Contents: 4)

The art is so similar to Syd Shores's signed Black Rider stories and Wanted Comics #48, that this most probably is by him. Faces, mouth with two long lines, and the horses and movement. He is credited on 7 issues of Wanted Comics, but not this.