The Guns of the Ghost Rider! (Table of Contents) 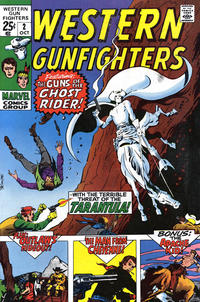 Tarantula No More! (Table of Contents: 1)

The Fury of Red Stallion! (Table of Contents: 2)

On page 2 panel 2, the Apache Kid's horse's name has been re-lettered from "Nightwind" to "Whirlwind". On page 4 panel 4, however, "Nightwind" remains unaltered. This may have been attempted because the Rawhide Kid, fairly popular at the time, also had a horse named Nightwind.

The Man from Cheyenne (Table of Contents: 3)

When the Sioux Attack (Table of Contents: 5)

At the end of the story, it's revealed that the protagonist is a young Kit Carson, frontier scout. Baker credit per original publication.

Once again, as in this issue's first Apache Kid story, "Nightwind" has been re-lettered. On page 3 panels 8 and 10, "Nightwind" becomes "Whirlwind". Amazingly, on the same page, panels 4 and 6, "Nightwind" remains unchanged.