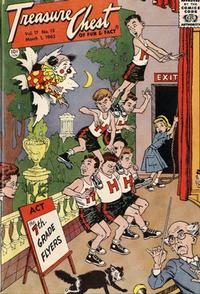 First Line of Dialogue or Text
Who can rescue the princess first?
Synopsis
An ogre is guarding a princess in a tall tower. Can you save her? Flip a coin for the number of stones to climb. Heads counts one stone; tails counts two stones. Obey the instructions on the stones you land on as you climb. First player to reach the princess wins.

A Friend in Deed (Table of Contents: 2)

Characters
Joan; Pat; Mom; Dad;
Synopsis
Pat made plans with Joan to help Joan on her school project this coming weekend, but Pat cancels at the last minute because she's been invited to Laura's house for ice skating. Joan questions why she's friends with Pat. Her mom thinks she's been spending too much time with Pat and should be friendly with other girls. On Monday, Pat invites Joan over to her house and she starts saying mean things about some of the other girls. Joan surprises herself by agreeing with her. Pat invites Joan to her cottage this Sunday, but there's no church in the area. Would it be a sin for Joan to miss mass?

An ongoing series, whereby a family situation is set up in 4 pages with no resolution and the reader is asked to judge what the right thing to do is in the given situation. One text page of 20 true/false questions about the story you just read follows, along with 2 discussion questions. There is another text page which discusses the moral implications of both sides of the story. The correct answers to the questions are upside-down on the bottom of the page and you can tally your score on a scoresheet.

It All Started With Knucklebones (Table of Contents: 3)

Genre
humor; historical
Synopsis
The origin of some of our board games.
Keywords
backgammon; checkers; chess; cribbage; Dice; dominoes

Knucklebones are the toe bones of sheep.

First Line of Dialogue or Text
There's something fishy about this, Mr. Moody.
Genre
adventure; humor
Characters
Uncle Harry; Will; Jody; Cousin Fud; Mr. Sharp; Mr. Whiffletree; Chief Jones; Florence; Hugo
Synopsis
Chief Jones thinks Mr. Sharp was involved in the collapse of the trestle. Uncle Harry wants to bring customers back to Moodyland by doing something special this year. He gets a telegram saying that his grandfather owned a game preserve in Africa, which will be condemned due to construction of a dam and he is welcome to the animals on the preserve. Harry gets a construction team to start building a zoo on the Moodyland property. Mr. Sharp starts plotting against Uncle Harry's zoo.

Synopsis
See if you can get from Ourtown to Yourtown along the maze of railroad tracks without stopping or backing up.

Synopsis
How many mistakes can you find in this drawing of ancient Egypt? It shows the Christian slaves building the Great Pyramids around 2500 B.C. Under 30- look again; 30-40- fair; 40-50- good; over 50- excellent.

Fun With Magnets (Table of Contents: 8)

Genre
biography; historical
Characters
Squanto; Capt. John Smith
Synopsis
Squanto arrives in Spain and is auctioned as a slave. A group of friars buy him to use as a gardener. The friendly friars teach him Spanish and convert him to Catholicism. They eventually release him and give him passage to England, where he will be more able to book passage back to America. He arrives back home after many years, only to find his village wiped out by a plague. He is the last of his people, the Patuxets. The Pilgrims arrive at Pymouth Rock and he befriends them and teaches them to hunt, fish and plant crops. One Pilgrim wrote that he was a special instrument sent by God.

First Line of Dialogue or Text
It's 777!
Genre
adventure
Characters
Chuck White; Ray Norris; Mr. Borden; Grandpa Norris; Buddy
Synopsis
The steam locomotive is travelling down the line as fast as it can to get to the trapped miners. At the mine, they're making arrangements to have flexible hoses and other parts ready for when the steam engine arrives. The trapped miners keep tapping on the wall so rescuers will know they're in there and alive, but their air is running out.

First Line of Dialogue or Text
Echo Mountain
Genre
humor
Characters
Pierre
Synopsis
Pierre climbs Echo Mountain and his gasp is echoed back at him.

Pantomime gag cartoon told in 5 panels.
On inside back cover.