[Physics of the 20th Century] (Table of Contents) 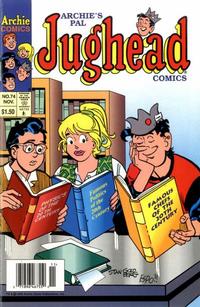 Jugumbo is a parody of the TV detective Columbo, complete with Jughead wearing a wrinkled trenchcoat and speaking similar to Columbo.
Just one more thing...George Gladir credited as scripter in reprint, but Hal Smith is credited correctly in this issue.

Trivia in Pursuit (Table of Contents: 3)

The Differences Between Archie and Jughead (Table of Contents: 4)

It's a Small World (Table of Contents: 5)