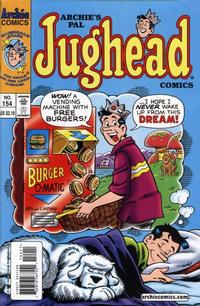 Genre
humor; teen
Characters
Jughead Jones; Clabberhead; Sarah; Emma; George
Synopsis
Jughead's newsman uncle helps unravel the mystery of why Sarah and her sister call Jughead Sam, and insist that they're in love with him. Emma had used Jughead's photo and concocted a spectacular guy to make her boy friend jealous; Sarah had fallen for the imaginary guy her sister described. Jughead helps get George and Emma back together.
Reprints
Keywords
Newspaper; Ontario; Toronto

A Need for Feed (Table of Contents: 6)

The I Love Archie Photo Contest (Table of Contents: 10)

The Treat Beat (Table of Contents: 12)