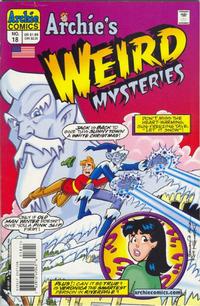 Splash panels for the two main stories in this issue.

What to Do in an Emergency! (Table of Contents: 6)

Genre
advocacy
Characters
Steel Sterling; kids; police
Synopsis
Comic story in which Steel Sterling explains how to keep calm and use 911 in an emergency.

It's Season's Screaming at Beaumont's Curiosity Shop! (Table of Contents: 9)

Sightings From the Editor's Vault (Table of Contents: 12) (Expand) /

First Line of Dialogue or Text
Now, on to some letters.