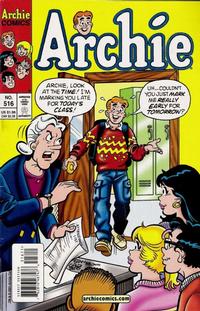 It Must Be Magic! (Table of Contents: 2)

First Line of Dialogue or Text
Earn $5 or $10 as an official reporter for the A-Files page.
Characters
Archie; parrot; parrot owner; Komodo dragon

Genre
humor; teen
Characters
Archie Andrews; Veronica Lodge
Synopsis
Archie avoids taking Veronica to dinner before the movie, then loads up with popcorn and such so that they won't be hungry afterward.
Reprints
Keywords
Movies

When reprinted in Archie Double Digest (Archie, 2011 series) #265, writing is credited to Mike Pellowski and inks are credited to Henry Scarpelli.

The Other Side of the Fence (Table of Contents: 13)

Genre
humor; teen
Characters
Archie; Mrs. Andrews; Mrs. Cooper; Mrs. Lodge
Synopsis
Mrs. Andrews daydreams about how much easier it would have been to have had a daughter instead of a son. Mrs. Lodge and Mrs. Cooper set her straight.
Reprints
Keywords
Mother

Yoshida and Grossman credits from GCD record at World of Archie Double Digest # 21. That same record credits script to Mike Pellowski and inks to Mike Esposito.

A Coined Phrase (Table of Contents: 15)

Genre
humor; teen
Characters
Archie; Betty; Jughead
Synopsis
Archie asks Betty to help him make a vinegar and green tomato pie. After exhaustive research, intensive shopping, and laborious baking, they succeed. But when Betty learns that Archie wants the pie in order to impress Veronica's father, she shoves it into his face.
Reprints

Color and lettering credits from GCD record at World of Archie Double Digest # 17. That same source credits Mike Pellowski for script and John Lowe for inking.