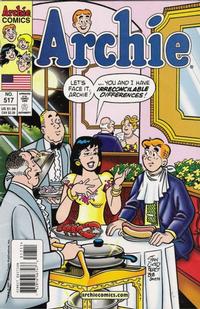 First Line of Dialogue or Text
Earn $5 or $10 as an official reporter for the A-Files page.
Characters
Kid; aliens

Genre
humor; teen
Characters
Archie Andrews; Jughead Jones; Reggie Mantle; Moose Mason; happy kids; second manager
Synopsis
The older Santa tells Archie that he must project warmth and show the children that he really cares about them. To help him remember, Santa gives Archie a token marked "care." After that Archie does a wonderful job with the children, but when he visits the downtown store to see his older friend, he learns that the store hasn't had a Santa Claus, or a toy department, for many years. The manager assures him, though, that there's a wonderful Santa at the mall.
Reprints
Keywords
Christmas; holiday

That's the Breaks (Table of Contents: 11)

Genre
humor; teen
Characters
Archie Andrews; Reggie Mantle; Jughead Jones; Dilton Doiley; Chuck Clayton; pretty girls
Synopsis
Since the guys are going on a ski trip, Archie and Reggie bring fake casts. That way they can hang around in the lodge and meet pretty girls. When the girls find out, Archie and Reggie get injured for real.
Reprints
Keywords
Skiing

Talk That Talk (Table of Contents: 12)

Genre
humor; teen
Characters
Archie Andrews; Jughead Jones; Chuck Clayton; Pop Tate
Synopsis
Archie says he should do his homework, but hopes someone will talk him out of it.
Reprints
Keywords
High school

Genre
humor; teen
Characters
Archie Andrews
Synopsis
Archie creates a mess making breakfast for his parents, then finds out that they've gone out to eat.
Reprints