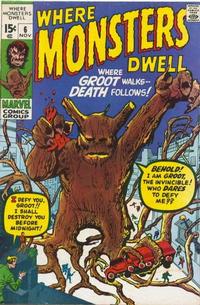 I Challenged...Groot! The Monster from Planet X! (Table of Contents: 1)

Narrated in the first person. Groot next appears in Marvel Monsters: Monsters on the Prowl (Marvel, 2005 series) #1 in a flashback story, he then appeared in modern continuity in Nick Fury's Howling Commandos (Marvel, 2005 series) #2 (January 2006) and eventually became a member of the second incarnation of the Guardians of the Galaxy.

I Dared to Look Into the Beyond! (Table of Contents: 2)

Job Number
T-773
Genre
science fiction
Synopsis
A scientist builds a time machine to travel into the future. He believes that he has travelled to the past, demonstrating that the future does not yet exist, but in fact he saw a future in which Earth was abandoned.
Reprints

My Friend Is...Not Quite Human! (Table of Contents: 3)

Job Number
[T-836 ?]
Genre
horror-suspense
Characters
Gustav; First Consul Napoleon Bonaparte (cameo)
Synopsis
A misogynist wood-carver falls in love with his sculpture and has himself transformed into wood, but his refusal to pay a gypsy mystic leads to her making the wooden figure human out of spite.
Reprints

When the Saucer Strikes! (Table of Contents: 4)

Job Number
T-376
Genre
science fiction
Synopsis
A airline pilot is nearly hit by a flying saucer and must bank suddenly to avoid it. All of the passengers but one were asleep, and the one who was awake says he didn't see the saucer. He lies because he's actually a Martian tourist and the saucer came to pick him up.
Reprints

Narrated in the first person by the Martian. Possible Wessler script per Nick Caputo from information in Robin Snyder's The Comics, Vol 26, No.4, April 2015. This may be a Wessler inventory story originally titled "Saucer Scare".