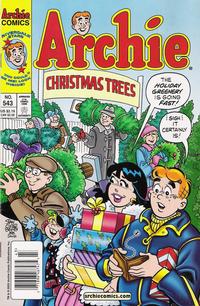 The Night Before Christmas (Table of Contents: 2)

Two-part story, complete in this issue. Imitates the poem "A Visit from St. Nicholas," attributed to Clement Moore.

First Line of Dialogue or Text
Another excellent A-files page submitted by readers like you.
Characters
Archie Andrews; bird; man

The Same Game (Table of Contents: 11)

Genre
humor; teen
Characters
Archie Andrews; Reggie Mantle; Jughead Jones
Synopsis
Reggie is having trouble with Windows on his computer. He consults Jughead at the electronics store, but all Jughead does is wash the windows.
Reprints
Keywords
Computer

Jingles All the Way (Table of Contents: 15)