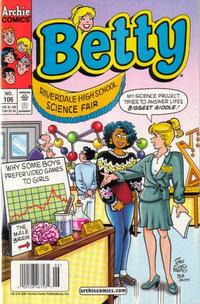 The Dinner Date (Table of Contents: 2)

Genre
humor; teen
Characters
Betty Cooper; Archie Andrews; Mr. Cooper; Mrs. Cooper
Synopsis
In order to prove to her exasperated parents that Archie is reliable, Betty insists that they invite him over for dinner. He accidentally demolishes everything, but the Coopers agree that he means well, and that things are never dull when he's around.
Reprints

First Line of Dialogue or Text
When you're in need of a friend indeed, she's always here to help.
Characters
Betty Cooper

Letters seeking advice, with answers from "Betty." Signed with artist's initials -- may be E L.

Grossman and Yoshida credits from GCD record at B&V Friends Double Digest Magazine # 221. Same record credits Mike Esposito with inking, rather than Rudy Lapick as credited in this issue.

Words to patriotic songs, and an invitation to sing along with the Archie website, in response to the September 11, 2001 attacks.

The Problem (Table of Contents: 11)

Genre
humor; teen
Characters
Betty Cooper; Polly Cooper (Betty's sister); Archie Andrews; Adam
Synopsis
Betty explains to her sister how she likes both Archie and Adam, and how the two boys are competing for her attention. She describes it as a problem, but the sister says that Betty doesn't have a problem -- the boys do.
Reprints
Keywords
High school

Betty's older sister is unnamed in this story, addressed only as Sis. In The Adventures Of Little Archie # 24 and other 1962-63 issues, the older sister's name is established as Polly, with her own feature.

Genre
humor; teen
Characters
Betty Cooper; Archie Andrews; Santa Claus [Barnaby Lumpkin]; kids
Synopsis
Betty has a job assisting a mall Santa Claus who has grown cynical. Christmas these days, he says, is all about money, and he does the job just for the money. When he loses his wallet, and two kids return it, he sees the error of his ways.
Reprints
Keywords
Christmas; holiday