The on-sale date is the publication date reported in the U. S. Copyright Office filings.

The listing for the issue on the Direct Currents promo page states the expected on-sale date was October 10.

The Demon of Gothos Mansion! (Table of Contents)

This cover is a tip of the hat to the classic cover of Detective Comics #31. 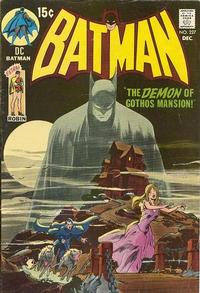 The Demon of Gothos Mansion! (Table of Contents: 1)

Job Number
S-608
First Line of Dialogue or Text
Dear Editor: In a carton, under a staircase...
Genre
superhero
Characters
The Batman

First Letters to the Batman (previously Letters To The Batcave). New name suggested by reader Anthony Kowalik. He also enclosed a sketch of The Batman which was considered of such high quality that Neal Adams inked it and DC used it as a header for the lettercol.