The Population Explosion! (Table of Contents) 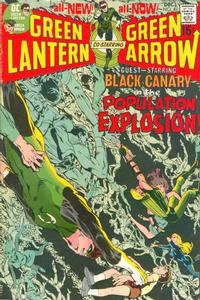 Death Be My Destiny! (Table of Contents: 1)

Job Number
S-540
Genre
superhero
Characters
Green Lantern [Hal Jordan]; Green Arrow [Oliver Queen]; Black Canary [Dinah Drake Lance]; Old-Timer; Guardians of the Universe; Mother Juna
Synopsis
Green Lantern and Green Arrow, now joined by Black Canary, travel to Oa and find that Old-Timer has been found guilty by the Tribune. The Guardians strip him of his immortality and sentence him to live out his days on the planet Maltus. The heroes go with him into his exile and discover a planet wildly over-populated due to the efforts of Mother Juna. After they put a stop to her work, the Old-Timer vows to restore balance to Maltus.
Reprints