The Supergirl from Krypton! (Table of Contents)

The price has been removed from the original, and the number got moved next to the month (should be underneath). DC Silver Age Classics Action Comics #252 also credits this cover to Curt Swan and Stan Kaye, other sources credit Curt Swan and Al Plastino. 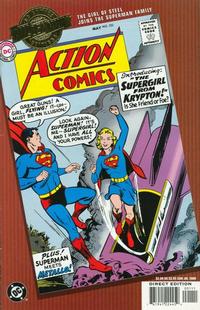 Action Comics #252: The Girl of Steel Arrives (Table of Contents: 1)

An overview of the context of this issue and the character, and credits. Appears on inside of front and back covers.

The Menace of Metallo! (Table of Contents: 2)

Genre
superhero
Characters
Superman; Lois Lane; Metallo [John Corben] (intro, villain); Professor Vale; Perry White; Jimmy Olsen (cameo)
Synopsis
Criminal John Corben, who is nearly killed in an auto accident, is given a robot body powered by uranium. When he is hit by bullets meant for Lois, she assumes he is really Superman. Recognizing a good idea, Corben impersonates Superman to collect more uranium. Running out of sources of uranium, Corben learns that he can also be powered by kryptonite. But he doesn't realize that the kryptonite he steals is fake, prop kryptonite and collapses.
Reprints

Genre
jungle; superhero; adventure
Characters
Congo Bill; Congorilla
Synopsis
While leading an expedition through the desert, Congo Bill stops at an apparently deserted oasis. But the water has been drugged, and the expedition passes out. When they awaken they find they are prisoners inside a nearby outpost that has been taken over by renegades. Bill, who is imprisoned separately from the others, rubs his magic ring and soon Congorilla is attacking the fort and freeing the expedition.
Reprints

Credits in this issue say "Unknown" for writer, but the corrections page in the Millennium Edition: Superboy (DC, 2001 series) #1, which was the last Millennium Edition, credits Robert Bernstein for this story.

The Supergirl from Krypton! (Table of Contents: 4)

The Man of Steel Combo Deal (Table of Contents: 5) (Expand) /