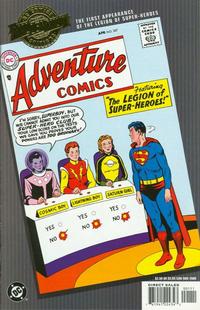 Genre
non-fiction
Synopsis
Describes the first appearance and early rise of The Legion of Super-Heroes.

Printed on the inside front and back covers.

The Legion of Super-Heroes (Table of Contents: 2)

Superboy
Genre
superhero
Characters
Superboy; Legion of Super-Heroes [Cosmic Boy; Lightning Lad [as Lightning Boy]; Saturn Girl]; Jonathan Kent (cameo)
Synopsis
Three teens from the future offer Superboy membership in their super-hero club. But when Superboy fails to complete three simple tasks, the Legionnaires pretend to reject him, until they reveal that the three tasks were merely intitiation pranks which proved he is a good sport.
Reprints

Reprint of the first appearance of the Legion. Lightning Lad is called Lightning Boy in this story. Several other unidentified Legionnaires appear in the story. The Legionnaires are not yet in their regular costumes.

A collection of quick jokes.

First Line of Dialogue or Text
Pete, would you like to take Rover out for a walk?
Genre
humor; children
Characters
Little Pete; Mister Roberts
Synopsis
Pete figures out an easier way to walk a dog.
Reprints

The 13 Superstition Arrows (Table of Contents: 5)

Writer identification by Martin O'Hearn. Writing credited as "unknown" in this issue.

Aquaman [straight, shadow behind]
Genre
superhero
Characters
Aquaman
Synopsis
Aquaman has to carefully deliver a nuclear projectile to the military before it detonates.
Reprints

Writer identification by Martin O'Hearn. Writing credited as "unknown" in this issue.