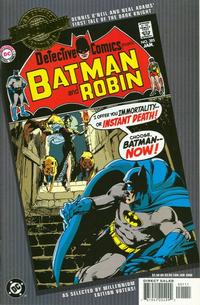 An overview of the context of this issue and the changes to Batman during the 1960s; also talking about the specific stories and the credits. This was also the first of the Millennium Editions to be voted on by the fans, and received nearly three times as many of the over 6,000 votes cast as the next runner-up, Wonder Woman #178. Appears on inside front and back covers.

The Secret of the Waiting Graves (Table of Contents: 2)

Credits for script, pencils and inks confirmed from Julius Schwartz's editorial records, provided by DC Comics. In this Millennium Edition, it incorrectly just says "Art by Neal Adams" for this story in the credits on the inside back cover, although Giordano's inking credit still appears on the reprinted sequence.

This filler was also reprinted in Detective Comics (DC, 1937 series) #395 (January 1970), which is why they reproduced it in this Millennium Edition.