Three on an Island (Table of Contents)

Cover illustrates the first story in the issue. 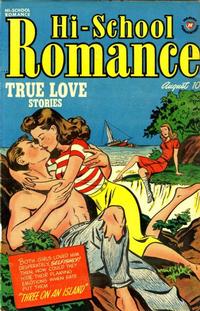 In This Issue (Table of Contents: 1)

Editorial notes and introduction to the stories with representative panels from each of the four stories im the issue. On the inside front cover.

Genre
romance
Characters
Enid; Brad; Sally; Steve Bruckner
Synopsis
Enid, the school's champion swimmer, has always liked Brad, but he is going steady with Sally. During a school outing on a boat, a freak accident leaves the three stranded on an island. While Sally has a sprained ankle, Enid leads the way providing food and shelter for the trio until Steve Bruckner arrives in his river patrol boat to rescue them. As they board the rescue boat, Brad tells Sally how much he cares for her, and Enid turns her eyes to strong and heroic Steve who is excited to be with her, too.
Reprints

Story was shortened from nine to seven pages and re-titled "Odd Girl Out" when reprinted.

My Sister's Husband (Table of Contents: 3)

Genre
romance
Characters
Ruth; Spence: Ginny; Jim Kennedy
Synopsis
Ruth lived with her sister Ginny and her husband Spence, but all was not going well for the married couple. Spence was unemployed and had large gambling debts but only Ruth knew the truth and Spence begged her not to tell Ginny. Amid all of that, Ruth's two-year courtship by Jim Kennedy was strained because Ruth felt her sister needed her. When Spence announced he had a job, Ginny was exuberant and Ruth decided it was time to call Jim to tell him he had been right all along.
Reprints

Goodbye, My Darling! (Table of Contents: 4)

My Most Romantic Moment (Table of Contents: 8)

Genre
romance
Characters
Gladys; Dr. Henry Norman
Synopsis
Gladys never thought when she took the job as Dr. Henry Norman's assistant she would end up engaged to him. Her euphoria was broken when she helped Henry with an experiment and an accident caused acid to scar her face. Although they married Gladys doubted Henry's love even though he spent all of his money for plastic surgery. One day he shows up exhausted, confessing that the strain has been too much for him. Feeling guilty, Gladys packs to leave but collapses. When she awakens, Henry tells her honesty and love is what they must build on.
Reprints

Reprint changed the title to "My Answer".

Names and addresses of the owner, editor and business manager.

Genre
romance
Characters
Stella Clayton; Steve Brady; Mrs. Clayton
Synopsis
In Europe, Stella's family had been royalty and her mother resents that she has lost all of that by coming to America. When Stella falls in love with Steve Brady, her mother calls him a peasant and threatens to disown Stella... until Steve pushes Mrs. Clayton out of the way of a runaway car. He is severely injured but recovers quickly to hear Mrs. Clayton call him, "son".
Reprints

You Must Read These Daring Confessions of Love (Table of Contents: 14) (Expand) /

Read All the Wonderful Magazines Written and Edited Especially for you! (Table of Contents: 18) (Expand) /