Cover is a flipped image of Daredevil (Marvel, 1964 series) #12, with alterations and additions by Marie Severin (Zabu added, and a face added in the lower left hand corner). 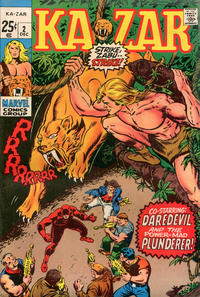 Sightless, in a Savage Land! (Table of Contents: 1)

Genre
superhero
Characters
Daredevil [Matt Murdock]; Ka-Zar [Kevin Plunder]; Zabu; Plunderer [Lord Parnival Plunder]; Maa-Gor; Foggy Nelson (cameo); Karen Page (cameo)
Synopsis
Matt decides to take a cruise to get his mind off of Karen. After his cruise ship is boarded by pirates, DD is taken to the Savage Land by the Plunderer. Ka-Zar attacks the Plunderer for trespassing on his domain and saves Daredevil's life as his costume reminds the savage lord of his encounter with the X-Men.
Reprints
Keywords
Savage Land

According to interviews with Romita, he pencilled the first two pages on his own and Kirby provided breakdowns from page 3 on.

The Secret of Ka-Zar's Origin! (Table of Contents: 3)

Genre
superhero
Characters
Daredevil [Matt Murdock]; Ka-Zar [Lord Kevin Plunder] (origin); Zabu; Foggy Nelson; Karen Page; Plunderer [Parnival Plunder] (origin); Maa-Gor
Synopsis
DD and Ka-Zar battle the Plunderer as the villain regales them with his origin and the origin of his savage brother. The Plunderer is after half of a necklace that his father gave the two brothers that will open a vault to a substance that destroys all weaponry. Everybody gets greedy and even the pirates and the butler vie for the halves of the medallion.
Reprints