First Line of Dialogue or Text
Got to get thru those hired guns..
Genre
western-frontier
Characters
Ghost Rider [Carter Slade]; Hurricane [Harry Kane] 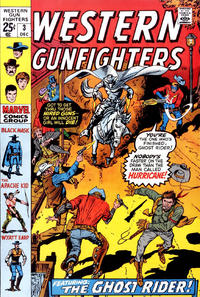 The story was originally announced for Ghost Rider (Marvel, 1967 series) #8. When the book was cancelled the story may have been partially completed. Note that the first five pages are inked by Vince Colletta and lettered by Artie Simek, while pages 6-10 are inked and lettered by Ayers; he may have completed the story for this issue. Info per Nick Caputo.

Recounts how the Apache Kid first acquired his horse Nightwind (also written as Night-Wind).
Title from cover of APACHE KID #53 [1].

Stampede of the Longhorns! (Table of Contents: 8)

Showdown at Sunup (Table of Contents: 9)

The Black Gauntlet! (Table of Contents: 10)