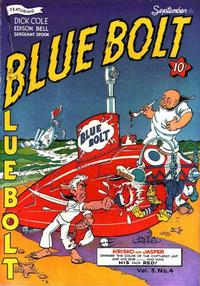 [The Floating Island] (Table of Contents: 2)

First line: "Who is Sergeant Spook?"

[Attack of the Two-Man Subs] (Table of Contents: 4)

First line: "Having been rescued from a small island..."

The Pirates of Australia (Table of Contents: 5)

Ham for a Yegg (Table of Contents: 6)

[The Innocence of Billy Watson] (Table of Contents: 7)

First line: "The White Rider and Superhorse are taking a brief vacation..."

[It's a Case of Mistaken Identity!] (Table of Contents: 8)

Genre
superhero
Characters
Sub-Zero; Freezum; the Japanese (villains, some die)
Synopsis
While Sub-Zero is inside a government facility conducting business, police suddenly approach Freezum and take him away to a temporary concentration camp, claiming that he is Japanese. But that is fortunate because, inside, Freezum learns from other Japanese prisoners that an invasion is coming soon to free them from American captivity.
Reprints

[The Lighthouse Nazis] (Table of Contents: 10)

First Line of Dialogue or Text
Johnny, I'll give you a quarter...
Genre
humor