Larsen is credited on this feature by Jerry Bails' Who's Who, and the artwork is identical to his signed or unsigned stories in many western comics like Hawk or Western Bandit Trails. 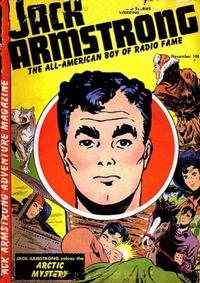 Meet Jack Armstrong and His Friends (Table of Contents: 1)

Art notes as for the cover.

Info by Craig Delich (November, 2005).
Howard Larsen is best to spot by his faces with large ears and noses, and bulging lips with dark shadows underneath, and big hats far back on the head seen in front view. The hero here has none of these shadows, but the other characters have.

"Based on information from the American Red Cross." Edward Little received an engraved medal "and will be asked to designate a shut-in youngster who will receive a free one-year's subscription to the Jack Armstrong Adventure Magazine."

The Case of the Forgetful Forger (Table of Contents: 5)

The bottom one-six of pages two and three in the story are mail-in coupons for subscriptions to Parents' Magazine Press comics. (back-to-back.)

Jack Armstrong vs. the Man of a Million Faces (Table of Contents: 7)

Art notes as for the cover and first story.

Change of Pace (Table of Contents: 8)

Text story with one large illustration.

Angel of Mercy With Water-Wings (Table of Contents: 11)

Genre
humor; teen
Characters
Billy Fairfield; Billy's mother; Billy's sister
Synopsis
Billy goes on a muscle-building program to win a prize at an amusement park, but gets a surprise the day of the contest.
Keywords
amusement park; weight-lifting

Framing sequence has Billy drawing the story himself, (hence the feature title), apparently to explain the difference in art styles from the rest of the issue.

Be the Talk of the Town with a New Monark Super Deluxe (Table of Contents: 17) (Expand) /