Land of the Leopard Men (Table of Contents)

Cover is a condensed version of the interior splash panel, which includes Howard Larsen‘s signature. 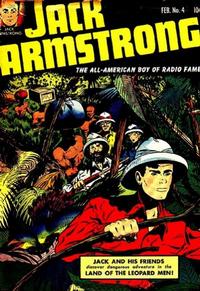 "Based on information from the American Red Cross." Thompson received an engraved medal and was "privileged to choose a shut-in youngster who will receive a one-year subscription to this magazine."

The Case of the Broken Headlight (Table of Contents: 5)

[The Three Suspects] (Table of Contents: 6)

Panels with typeset text underneath. Solution is printed upside-down on same page.

Win One of These Columbia Bikes! (Table of Contents: 7) (Expand) /

Genre
adventure
Characters
Jack Armstrong; Jim Fairfield; Billy Fairfield; Betty Fairfield; Professor Proteus
Synopsis
Jack and his friends are in Africa to get motion pictures of the savage Leopard Men. When his safari leader refuses to enter the land of the Leopard Men, Jack and Billy push on. They save a pygmy from a crocodile and he leads them to large clearing which the Leopard Men use for their ritual dances.
Keywords
Africa; crocodile; disguise; leopards; motion pictures; pygmy; salt

Splash panel covers most of first two pages, with no gutter.

The Team Mates (Table of Contents: 9)

Text story with one large illustration. Story concludes on page 45 of the issue.

Genre
adventure
Characters
Betty Fairfield; Kate Anderson
Synopsis
Betty goes on a skiing trip to the mountains. Her female ski instructor rescues a woman who has fallen into a crevasse during a blizzard.
Keywords
blizzard; crevasse; skiing

Bottom one-sixth of pages four and five of the story are subscription coupons to Parents' Magazine comics (back-to-back).

First Line of Dialogue or Text
I wonder who instructed Gus in the use of snowshoes?
Genre
humor
Synopsis
A man uses snowshoes in an unorthodox way.
Keywords
snowshoes

Cartoon is signed, but is illegible.