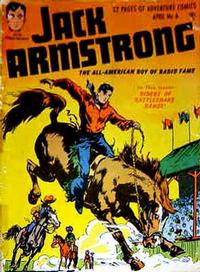 The Curse of the Emerald Scarab (Table of Contents: 2)

"Based on information from the American Red Cross." Bobby Tatum received an engraved medal and a one-year subscription to Jack Armstrong will be sent "free to a shut-in youngster chosen by Bobby."

The Case of the Flaming Toys (Table of Contents: 5)

A "solve-the-mystery" story with panels and text underneath. Solution is printed upside-down.

The Riders of Rattlesnake Range (Table of Contents: 8)

Text story with two large illustrations. Concludes on page 40 of this issue.

Genre
humor; western-frontier
Synopsis
A sheriff hears shots inside a saloon, but it's only cowboys making popcorn.

Danger on the Hoof (Table of Contents: 15)

Jack Sparling identified as artist of this feature by Jerry Bails.