[Mystery on the Diamond] (Table of Contents) 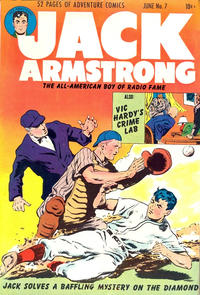 A Message to the Boys of America from Jack Armstrong (Table of Contents: 1)

Jack Armstrong Solves the Mystery on the Diamond (Table of Contents: 2)

The Case of the Silent Southpaw (Table of Contents: 3)

Genre
detective-mystery
Characters
Vic Hardy
Synopsis
A getaway car overturns while fleeing a robbery. One of the crooks dies, but the other escapes with the loot. Vic Hardy has to find a way to identify the pair.
Keywords
dry cleaner; robbery; used-car dealer

"Based on information from the American Red Cross." O'Banon received an engraved medal and "a shut-in youngster of his choice will receive a free one-year subscription to Jack Armstrong Magazine."

Text story with one large illustration.

Genre
sports
Synopsis
A referee climbs a stepladder before tossing the ball for a jump ball in basketball.
Keywords
basketball

First Line of Dialogue or Text
Now, remember, first one down is a rotten egg.
Genre
sports
Synopsis
A referee gives some unorthodox instructions to two boxers.
Keywords
boxing

Signature is hard to read.

Daydream Mike and His Wonderful Bike! (Table of Contents: 11) (Expand) /

The Counterfeiters (Table of Contents: 14)

Genre
detective-mystery
Characters
Vic Hardy; Jack Armstrong; Chief Dale; Professor Proteus
Synopsis
Jack Armstrong visits Vic Hardy at his lab and learns facts about paper currency and how to detect a counterfeit bill. Then the lesson gets put to practical use when counterfeiters are found in the area and Vic and Jack have to help capture the gang.
Keywords
blind; charity drive; counterfeiting; FBI; guide dog; impersonation; machine guns; newsstand; tear gas

Story starts with a large illustration and a half-page of story in text format. Then with page two it changes into a regular comic story.

Lion on the Loose (Table of Contents: 16)

Genre
adventure
Characters
Betty Fairfield; Molly Madden
Synopsis
Betty is friends with Molly Madden, a star trapeze artist in the circus. When a lion escapes, Betty comes up with an idea to lure him back to his cage.
Keywords
cage; circus; hamburger; lion; train; trapeze

Bottom one-sixth of pages three and four of the story are subscription forms.

3 Great Sport Books Every American Boy is Bustin' to Own! (Table of Contents: 18) (Expand) /

An Important Notice to Jack Armstrong Readers (Table of Contents: 19)

Inside back cover. Notice that publication of Jack Armstrong is changing from monthly to bi-monthly.

Sleek as the New Convertibles (Table of Contents: 21) (Expand) /