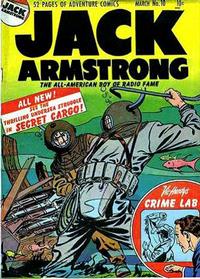 Shot in the Dark (Table of Contents: 2)

Genre
adventure
Characters
Jack Armstrong; Vic Hardy (Chief of the Scientific Bureau of Investigation); Billy (crime lab tech); Boss Jeffers [Ed Nixon] (villain, newspaper editor); Jeffer's thugs (villains)
Synopsis
A four-alarm fire in the city peaks Vic's interest when he finds a can of metallic sodium, any arsonist's dream, so he visits a newspaper editor and voices his suspicions that Boss Jeffers has hired an arsonist to set fire to his own building to collect the insurance. When the editor refuses to print a story on this, Jack and Vic plant a false story about a radium shipment in the paper to draw the crooks out into the open.
Keywords
The Star (newspaper)

The Case of the Photo Finish (Table of Contents: 3)

Get This Sports Pedometer (Table of Contents: 5) (Expand) /

Daydream Mike and His Wonderful Bike (Table of Contents: 6) (Expand) /

Text story with one large illustration. Continued on Page 49 of the issue.

You Can Get These Hand Colored Coin Holder Zipper Billfolds (Table of Contents: 15) (Expand) /

Yippee, Lots of Happy Reading with These Thrilling Magazines. (Table of Contents: 16) (Expand) /