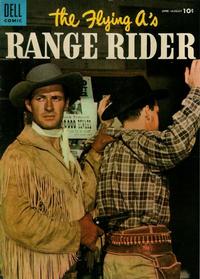 On inside front cover in black and white.

The Vanishing Casa (Table of Contents: 2)

The Flying A's Range Rider and "The War Horse" (Table of Contents: 3)

Story is continued on inside back cover and back cover. Art identification by Steinar Ådland (GCD Error 5027, September 19, 2010).